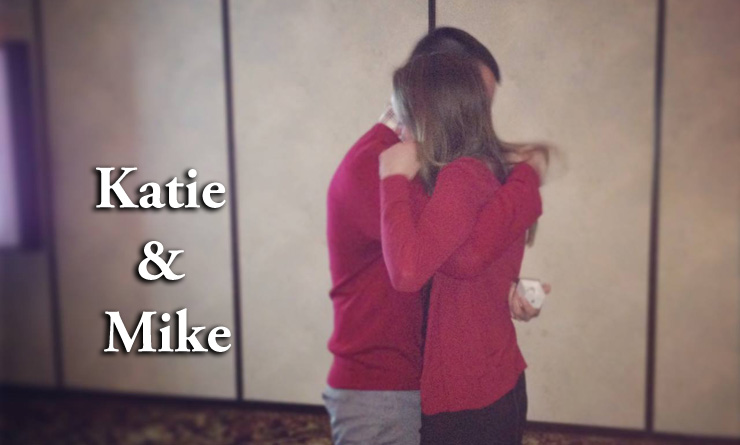 I was contacted by Mike and we discussed the making of a “proposal video” that he wanted to surprise his girlfriend Katie with.  He had a pretty good idea of what he wanted to accomplish and I had some ideas to contribute regarding video taping and final presentation of the surprise.

He presented the video on DVD at their annual family business Christmas party and I created an opening screen that indicated they were going to be screening a proposed commercial that had been created for the business.  Not only was Katie surprised but she was also video taped while watching it.  Mike had two cameras running during the presentation and after the event he sent me those two videos to incorporate into the final production.  Capturing Katie’s reactions as well as family and friends who also came as a surprise and then adding those elements to the final video completes the story.

We look forwards to working with Mike and Katie again on their wedding day!

Now for the process:
As Mike solicited video comments from out of town friends and family we decided to use shared folders on drop box. He recorded other people that he could get to and sent those clips to me on both Mini DV tape as well as AVCHD files on an SDHC memory card. Lastly I received digital photos via email. Final Cut X handled the various files and formats and served as my editing software. Mike made the trip from Buffalo to be recorded here, as well as spend a little bit of “hands on” time with me as I started the editing process. From that time all communication was done via email or phone.
Finished video delivered three ways:
1. Digital copy for various devices
2. Website & Social Media
3. DVD for hard copy and archival

Mikes review:
★★★★★ December 10, 2013
“Dave exceeded my expectations when producing a proposal video for my girlfriend. I started off with a good idea of what I was looking for, but he really put in a lot of thought and effort to make sure the video came out the way I wanted and communicated with me very quickly and professionally. He also met with me in person for a few hours to make sure we were both on the same page and filmed a small segment to use on the video itself which I really appreciated. I would definitely recommend Dave and his company for any sort of video project, small or large. Thanks Dave!”

"Dear Dave and Darlene, Our wedding video is incredible!"