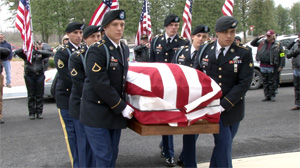 Corporal Elmer Kidd was killed in action back in November of 1950 when he was only 26 years old. Kidd was a local man from Seneca Falls when he enlisted in the army in 1948. Kidd fought in the Korean War and was killed in the Battle of the Chosin Reservoir in North Korea. His remains were recently identified through DNA.

Every aspect of your work is professional and beautiful.